Enrique Iglesias recently did a exclusive interview with “Variation” Magazine! 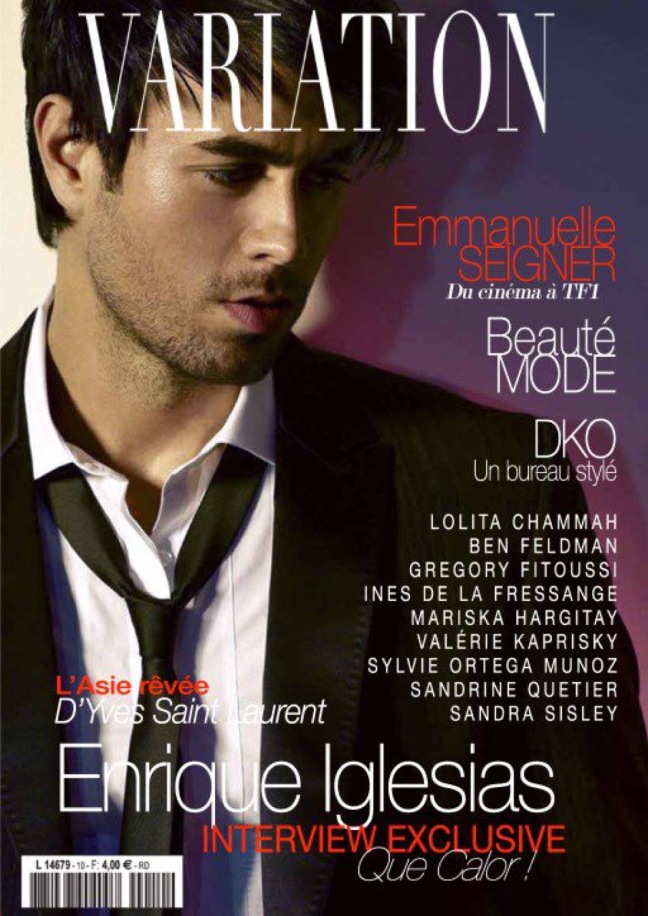 In the new interview Enrique talks about returning to Paris, working with Save the Children and how his life change after becoming a Father.

Check out scans of the interview as well as a English translation below: 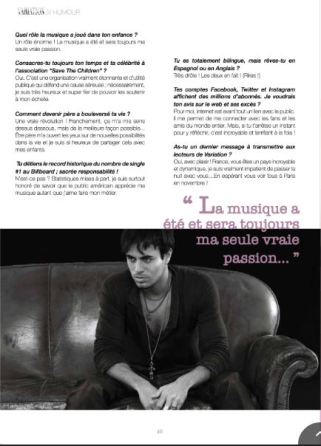 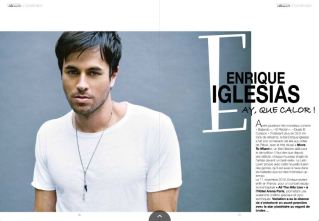 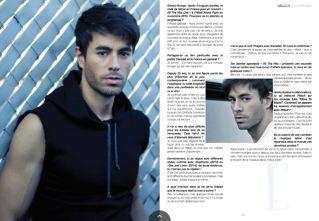 Gerard Granja: After 4 long years, here you are back in France for a concert – All The Hits Live – at AccorHotels Arena Paris in November 2018. Why did you wait so long?

Enrique Iglesias: We toured with this show in many cities around the world, which took us a long time. I also went back to the studio to record new songs. But, now, I’m ready for a brand new show and to tell you everything, I feel very excited again to play in Paris.

Do you share a particular bond with the French public and France in general?

I think … French fans have a certain energy that is very inspiring!

For 25 years, you have been one of the most influential figures in contemporary pop; how do you explain this longevity in a profession where everything goes so fast!
I just keep doing what I love doing most, that is, writing and playing, and I’m lucky to have such loyal fans who support me.I am trying to keep moving forward and make each show new and exciting.
There is nothing more difficult for artists than to renew themselves. Does that make you eternal beginners?

I think it depends on how we see things, but in this business, I think the one never really stops learning …

It’s a kind of cyclical process.The names are different to renew the process, but at the base, it always remains the same.

At what point in your life did you realize that music was the way to go?

Quite honestly it’s something I’ve always known deep inside me.There has not been a show for me!
I read that night inspires you to work.You confirm it?

It’s just because of the atmosphere and the -vibes- that night has … sometimes I have to go, I’m a real nocturnal!

Your latest tour – All The Hits – presents a new staging with a lot of special effects, you tell us a few words?

Of course! There will be lasers, co2 guns, confetti and many more surprises … just check it and you’ll see for yourself.

After several collaborations, you found Pitbull on your new hit “Move To Miami”, how are the recording sessions with Pitbull?

Always so fun! For me, it’s a great friend, so being in the studio with him is always something very natural and very fun too.

Are you surprised to see how much Latin music has spread in the world in recent years?

Absolutely! It is amazing to see Latin music consumed worldwide especially since the last two years. But you know, it’s a good thing, I see that the more people embrace the power of the Latin music, the better it is!

What role did music play in your childhood?

A huge role! Music was and will always be my only real passion.

Do you always devote your time and your celebrity to the association “Save the Children?

Yes. It is a truly amazing organization and of public utility that defends a common cause;I am, of necessity, very happy and proud to be able to support them at my level.

How to become a father changed your life?

A real revolution! Frankly, it turned me upside down, but in the best possible way … being a father opened my eyes to new possibilities in life and I’m so happy to share this with my children

You have the record number of #1 singles in the Billboard; sacred responsibility!

Is not it? Statistics aside, I am especially honored to know that the American public appreciates my music as much as I like doing my job.

You are totally bilingual, do you dream in Spanish or in English?
Very funny! Both actually! (Laughs!)
Facebook, Twitter, and Instagram accounts display millions of subscribers. I would like your opinion on the web and its excesses?

For me, the internet is above all a link with the public. It allows me to connect with fans and friends around the world. But, if you stop for a moment to think about it, it’s incredible and terrifying at the same time!

Do you have a last message to give to Variation readers?

Yes with pleasure. France, you are an incredible and dynamic country, I am really looking forward to spending the night with you … Hoping to see you all in Paris in November.