Enrique Iglesias recently did a exclusive interview with ‘Quién’ Magazine.

During the interview Enrique spoke about his twins, his relationship with Anna Kournikova and his many sleepless nights.

Check out the scans from inside the magazine and a full English translation below:

Enrique Iglesias cares a lot and sleeps a little, but now his children are also the ones who steal his sleep. In an exclusive interview, he told us about being a father along side Anna Kournikova, his position on marriage and how he freed himself from the weight of his last name.
The only thing that should rob Enrique’s sleep would have to be his twins, Lucy and Nicholas. Anyone who has a slight idea of the successful career of the Spanish singer, who has a dozen studio albums has sold more than 170 million copies, would suppose that the Spanish pop icon has plenty of reasons to sleep peacefully.
He himself knows, at 43, that for a long time he is in a situation that takes him away from sleepy the average worries that keep millions of ordinary men awake late at night. “Undoubtedly, every day of my life is special because I can be with my family and make music, which is what I love. But sometimes, if for some reason I take it too seriously, I try to reflect on everything, analyze it and realize how lucky I am to be in a really privileged situation,” says Enrique in a telephone interview from his home in Miami.
However, it is constant that in the early hours – while sleeping with his partner of the last 17 years and mother of his children, Anna Kournikova -, that he open his eyes in the middle of the darkness. “Yes, even today I suffer from insomnia,” he confessed. “I’ve been like that since I was little. As a child I could not sleep, and they said that it was  because I was very nervous and restless, now they tell me that it is because I am a preoccupation. The truth is that I worry about everything, although sometimes it is silly, and that is what does not let me rest. I’ve never been good at that … I usually do not sleep well. “
Currently occupying his head is finding a fair balance between his career and personal life. “Being a father transforms everything. Not so much in my way of thinking, but in my priorities. It is a happiness that you feel incredible inside, but also a great responsibility and I know that I want to continue enjoying my passion, which has always been to write songs and sing them. Hopefully I can find a balance to do what I’ve always wanted, music, and at the same time be a good father.”
That’s why Enrique takes measures in his current world tour, which has dozens of concerts in Europe and America: not to be away for more than 10 days from his family. “It’s about managing the calendar well. For my children, being at home is very important.”

In November of 1995, Enrique officially began his career an adverse profile due to the shadow of his father. I debut with a homonymous album that won him the Grammy for Best Latin Pop Album. But soon the singer of “Si Tu Te Vas” left his comfort zone, worked to achieve the crossover and be a global pop icon that always made it in the first places of the charts, and is the only Latin artist with 27 songs that debuted in the number one spot of Billboard’s Hot Latin Songs.

By reminding him of the path, he is surprised by the passage of time and recognizes, in the retrospective, that making a name was a big challenge, which, however, does not torment him. “I would lie to you if I told you that I never weigh my last name, but the first years were so quick, of many trips and work, that I did not have time to think about it either. It is more, I do not know at what moment I said, ‘Oh, because what about my father and his name is not something that I regret,’ but if I thought about it and, of course, when I started my career I knew that I had to get away as much as possible and that’s why I started very independently. And that’s also why I think maybe my relationship with my father suffered at some point. “
No, it is not a coincidence that in the beginning he chose Martinez as his artistic last name, or that he would fly in Mexico, without telling anyone of his family, to sign his first contract with a record label at the beginning of the 90’s. “I do not regret anything, I would do the same: I would not tell anyone, including my dad and my mom, because if for some reason I could not be where I am today, if someone had taken me  another way, I would not forgive him.”
Enrique knows the weight of decisions and their consequences. Maybe this, taking full control of your life, keeps you awake, thinking. “The important decisions of my life I talk to my closest people, but the truth is that in the end I take them. They must be mine … I do not like to make mistakes because of the opinions of others. Those that I have committed, have been mine. I prefer that than choosing a foreign road. That I do not forgive, “says the singer of “Move to Miami,” his latest single.
Despite this philosophy, one of its pillars is to trust in his closest circle: the most important people in your life have been with you for decades, since he values loyalty above all. “This is important because it gives you stability. I have always been loyal and I have liked to be surrounded by the people I trust, those people who are not afraid to tell me the truth when I am wrong. “
In a closed group, along with his current partner, is Elvira Olivares, his nanny, who lent him 500 dollars to record his first demo and also, to take care of him when he moved to Miami after his grandfather was kidnapped by the terrorist  Basque group, ETA. “She is my second mother, the woman who rewarded me when necessary, the person with whom I shared the most time. I love her more than myself, one of the most important people in my life. The only one I could trust for a long time because I knew she was not going to share it with anyone “

Enrique’s other axis is individuality and he is very clear about it: “I’ve always been a kid who likes solitude. Even today. I never had him looking: I like to be alone, to have moments to reflect. Those moments of solitude feed me a lot, especially to make music. “

But in terms of a couple, respect for the essence of each other is fundamental for the singer and it is enough to read his speech between lines to distinguish that there lies the secret of such a long relationship with  Anna Kournikova, whom he met in 2001 on the set of his video, “Escape.” This essential element of his life as a couple, the respect for individuality, is clear in this fact: Anna does not mess with him. “I’m the most simple person in the world. If I like a hat, I use for 10 years, and the same with pants. My partner understands me, she knows that when she met me I was already like that and that I will not change, “he says smiling. “Maybe our partners can help us a little bit to see us better, if they can influence you … but even so, you’re the way you are.” He also laughs when he emphasizes the obsession that everyone has to know if he and Anna will get married sometime .. or not, why do not they just believe in marriage? “Marriage does not define the happiness of a couple. By saying this maybe you think I’m against marriage, not at all. I think it’s great if it’s what you want to do. But what I’ve always said is that this does not mean you’re going to be happier; I know husbands who have been sad for years. If you do not marry it is not something strange, it does not mean that you are not going to be happy; and if you do, it’s not going to make you feel different.”
Another point in common that unites them as a couple, in addition to respect and free comp individuals, is that they understand each other perfectly, because to succeed at Enrique’s level, you need an almost sporting discipline. “She being a athlete m and at the same time famous, she understands me perfectly. She knows that this needs discipline, she knows what this career requires. I think that if she did not know, it would be very difficult to share my life with someone who did not understand me.”
Yes, Enrique seems to have everything, he should sleep peacefully. 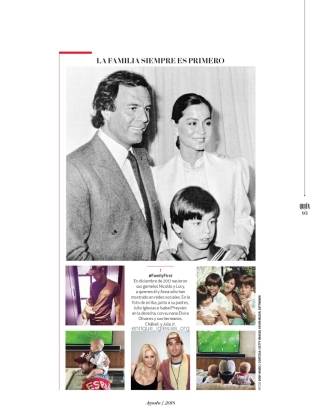